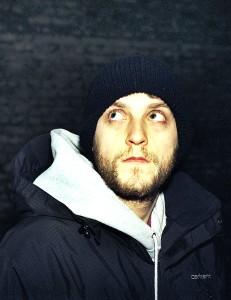 sometimes in 2001 the first demotape from "mimaku spldat" found it's way to phantomnoise records. right after the first listenings, it seemed clear...its stuff for our little imprint. mimaku spldat a male guy out of munich in the south of germany, is 20+ and has various experiences as musician. he started with drumming in the early 90ies and got in infected with breakbeats when riot beats relaesed the "rough & fast" compilation in 1994. laster on in 1999 he started producing his first electronic trax with the 12bit sampler akai S 950 & cubase running on an atari computer. the first trax sound like dirty jungle through various gituar FX pedals. in 2000 he met a guy, probably besides Mimaku Spldat on of the few breakbeat enthusiasts in munich, with whom he started some illegal parties and the projekt "kolonie 1" which is the name of the part of the city munich,they lived in. after that project "mimaku spldat" was born and one amiga 600 was now used too, besides dirty jungle and breakcore he produced some soundscapes for theatre and exhibitions. in 2002 a PC complited his setup and trash tapes 34, his first real release after some demos, was published.