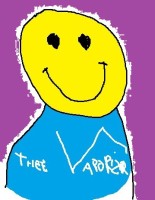 Steven de Mesmaker aka Thee Vaporizer seems to be addicted to Leipzig, before he releases on Phantomnoise Records he also released his debut record on an imprint out of that city. In 2001 the 30 years old belgian released "R3c4lc1tr4nz" on Jetlag Records (jet010) and the record was played here and there by the phantomnoise family. Someday Da Halz from Jetlag, talked with Alex Dee of Phantomnoise about the 2 CDs of unreleased Vaporizer trax still floating around. After some e-mails and some demos of new Vaporizer trax, it was done, this man perfectly fits into the Phantomnoise artist rooster. I may 2k4, "Matkoe Shamou" was released on Phantomnoise (PNR009), 8 trax of post-idm madness with a big portion of fun.