On stage they perform with Georg Gaigl's exclusive visuals projected onto the covers of their laptops.

In 2003 Alex Dee of Phantomnoise heared the first demo trax of an forthcoming record by Hp.Stonji aka Hans Platzgumer and e.stonji and really liked it. Jens Doering aka e.stonji, who already released on Phantomnoise Records, went on updating the Phantomnoise office about news concerning this album. Finally it was planned to release it on Spezialmaterial Records from Zürich, a good decision, because the record totally fits to the Spezialmaterial release roster. The only sad thing about it was and still is, it will be a CD only release. That's the point when Phantomnoise came back to the setting, thinking about a vinyl remix ep of mélaina choléť. After some talks to various artists, 6 happy remixers were found and these 6 you are now able to listen to, on Phantomnoise 011. 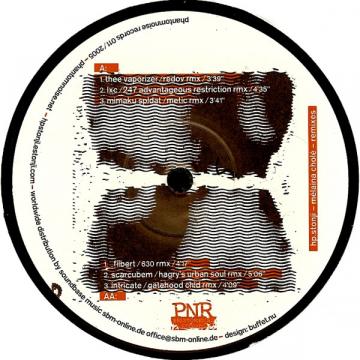